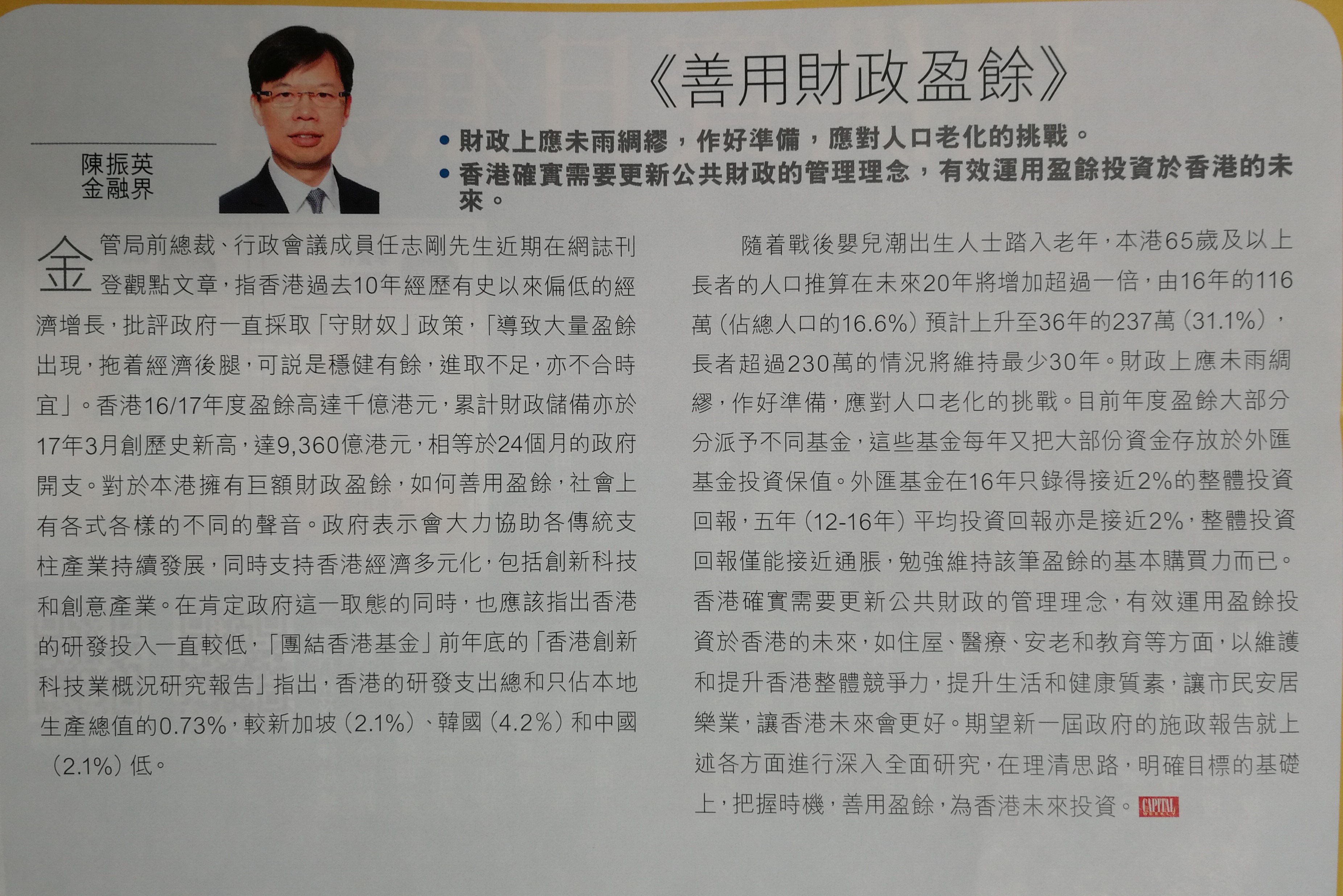 The former Chief Executive of the Hong Kong Monetary Authority and non-Official Member of Executive Council, Mr. Joseph Yam Chi-kwong, writing in his personal blog recently, talked about Article 107 of the Basic Law in relations to public expenditure.  He criticized the “miser policy” adopted by the Administration that attributes to the slow economic growth in the past 10 years, which is unusual in Hong Kong’s history. It brings substantial surpluses but sluggish economic growth. This out-dated policy though steady but too complacent.

The budget surplus recorded 100 billion dollars for 2016/17 while the accumulated fiscal reserves hit its record high in March 2017 at 936 billion dollars which amounts to 24 months of government expenditure. Our society has different views on how to better utilize such a huge amount of surpluse. The Administration vowed to support the traditional pillar industries along with the diversification of the economy, namely information technology and creative industries. While appreciating this attitude of the Administration, we also need to point out the lack in investment in R&D in the past. According to the research report entitled “The Ecosystem of Innovation and Technology in Hong Kong” conducted by “Our Hong Kong Foundation”, the current annual R&D spending constitutes 0.73% of the GDP, lower than that of Singapore(2.1%）, Korea(4.2%) and Mainland China(2.1% where Shenzhen is 4%)

Furthermore, the baby-boomer after the World War II is ageing. The number of elderly persons aged 65 or above is projected to be more than double in the coming 20 years, rising from 1.16 million as estimated in 2016 (16.6% of total population) to 2.37 million (31.1% of total population). The ageing population at the level of more than 2.3 million will last for at least 30 years. The fiscal policy should save money for a rainy day to meet the challenge of ageing population.

Most of the annual surpluses will be allocated to various funds at present and most of the capital from these funds will in turn invest in Exchange Fund. As at end-2016, fiscal reserves and cash deposit and accumulated surpluses of various government and public funds has a total value of HK$1,760 billion. Together with the monetary basis of HK$1,640 billion, the total asset of Exchange Fund amounts to 3,630 billion dollars. However, the investment return by Exchange Fund in 2016 was only close to 2% while the average investment return in five consecutive years (2012-2016) was also nearly 2%. This return can only cover inflation and hence barely good enough to maintain the purchasing power of the surpluses.

Hong Kong should revitalize the management philosophy of its fiscal policy so as to invest the surpluses effectively in our future, such as housing, infrastructure, medical, elderly services and education in a bid to maintain and increase the overall competitiveness of Hong Kong, further improve our living standards and quality of well-being and enable the people to live and work in peace, making a better Hong Kong for tomorrow. It is expected the Policy Address to be announced by the new Administration can study thoroughly the above issues and develop a clear rationale and target to grasp the opportunity, wisely use the surpluses and invest for the future of Hong Kong.