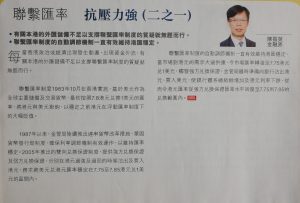 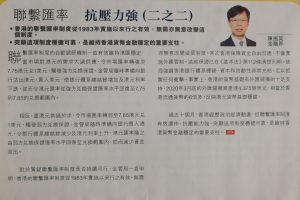 Whenever there is an outflow of capital from Hong Kong, in times of political or economic instability, questions on whether the foreign exchange reserve of Hong Kong is sufficient to sustain the Linked Exchange Rate System (LERS) run wild.

The Linked Exchange Rate System for Hong Kong was established in October 1983. Hong Kong Dollar (HKD), which had depreciated worryingly under the floating exchange rate regime, was pegged to US Dollar (USD), chosen since it was the major global reserve and trading currency, at the level of US$1 = HK$7.8, in an attempt to stabilise the HKD. Since 1987, the Hong Kong Monetary Authority (HKMA) has implemented a series of measures on monetary reform to fortify the system of the Currency Board to ensure that the operation of the interest rate adjustment mechanism will function properly to keep up a stable exchange rate. In 2005 the Two-Way Convertibility Undertaking (CU) was introduced – the Strong-side CU and the Weak-side CU, where HKMA is to sell and buy HKD when it becomes too strong or too weak respectively to make sure that the exchange rate between the USD and the HKD will be kept  between 7.75 and 7.85.

The automatic adjustment mechanism of LERS has been instrumental in maintaining a stable HKD. When the demand for the HKD is greater than supply, the Strong-side CU, once the exchange rate between the USD and the HKD goes up to the 7.75 level, will be triggered. HKMA is immediately ready to sell HKD to banks for USD such that the Aggregate Balance will increase and the interest rate for HKD will fall, thereby lowering the exchange rate to the range of between 7.75 and 7.85. Conversely, when the supply of HKD exceeds demand and drags the exchange rate down to the 7.85 point, the Weak-side CU will be turned on. HKMA, , will be all set to buy HKD from banks so as to lower the Aggregate Balance and raise the interest rate for HKD, whose exchange rate, through the Weak-side CU, will be reinstated to the desirable range, eventually reducing the outflow of capital.

With regard to the doubts on the sustainability of LERS, HKMA asserts, “The Linked Exchange Rate System of Hong Kong, since its launch in 1983, has always been effective. There is neither any need nor plan to change the system. Moreover, free flow of capital is protected and there shall be no restrictions of foreign exchange, the guarantees of both of which are stipulated under Article 112 of The Basic Law.”

The authorities stressed that the banking system of Hong Kong, with abundant capital and liquidity, is so stable that it can ward off the impact of any financial crisis. In fact, the monetary system is fully supported by the foreign exchange reserve, the asset value of which stood at US$437.5 billion as at the end of March 2020, equivalent to more than six times of the circulating currency in Hong Kong, showing how solid the foundation of Hong Kong Dollar is.

Over the past ten months, despite the political and economic unrest that Hong Kong has experienced, LERS has worked effectively. Its strong resilience highlights the stability and reliability that it unfailingly provides. LERS is certainly a cornerstone of safeguarding the monetary and financial stability of Hong Kong.